Is it the calm before the storm? In November 2015 we cannot observe major regulatory news and updates for medical devices in Russia and the Eurasian Economic Union countries… In one month’s time the common harmonised market of pharmaceuticals and medical devices will begin functioning (at least formally). Meanwhile, at the current time, there are still a lot of questions to be answered, second-level regulations and guidelines to be published…
Nevertheless, here are some updates which should be useful to know for your Russian regulatory projects:

In November 2015 the Russian Federal Agency on Technical Regulating and Metrology (Rosstandart) published an updated version of its voluntary national standard GOST R ISO 18133, which is composed of five parts and which contains technical requirements on labelling and accompanying information and documentation for In Vitro Diagnostic (IVD) medical devices (part 1, link in Russian), IVD reagents (part 2, link in Russian), IVD instruments for professional use (part 3, link in Russian), self-testing IVD devices (part 4, link in Russian), and IVD instruments for self-testing (part 5, link in Russian). The new standard will come into force in November 2016 and will replace the version from 2009, which is valid currently. It should be recalled that the use of standards is voluntary, but recommended by Roszdravnadzor as the best way to demonstrate that a medical device meets all labelling requirements during the approval process and into further commercialisation. 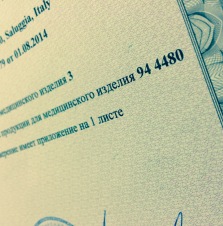 Another update from the Federal Agency on Technical Regulating and Metrology (Rosstandart) is the extension of validity of the Russian product classification code OKP (ОКП ) until 1 January 2017. The OKP code is a classification code which is present in every registration certificate (in addition to the medical device safety class and nomenclature classification) and is used by customs officials, among others, to define the amount of VAT exemption during medical device import and customs clearance. Previously, the deadline for transition into a new product classification system was set as 1 January 2016, which seemed to threaten a wave of uncertainty in calculation and in applying VAT exemption in practice. It should also be noted that some months ago Roszdravnadzor (the Russian medical device regulator) expressed the opinion that, in future, this code should be removed from the registration certificate.

Armenia ratified the Agreement on common principles and rules of circulations of medical devices signed at the end of last year by EEU countries. In such a way, for November 2015, this agreement is approved by Russia, Belarus, Kazakhstan, Kyrgyzstan, and Armenia. It should be noted that, at present, unlike in other EEU countries, Armenia regulates the approval process for pharmaceuticals and not medical devices, which suggests quite deep further changes are coming in the medical device sector for the country.

In conclusion, I would like to thank you for the following and remind that you can get regulatory updates about Russian medical device regulations from this blog directly in your e-mail using the ‘Follow’ button in the toolbar in the upper corner of this page.